A class of service (CoS) is effectively a group of dialing permissions that can be applied to individual extensions. Primarily they manage which outbound routes can be dialed by members of that CoS, but restrictions can also be applied to allow/prevent calling specific extensions, menus, groups, and conferences internally as well. 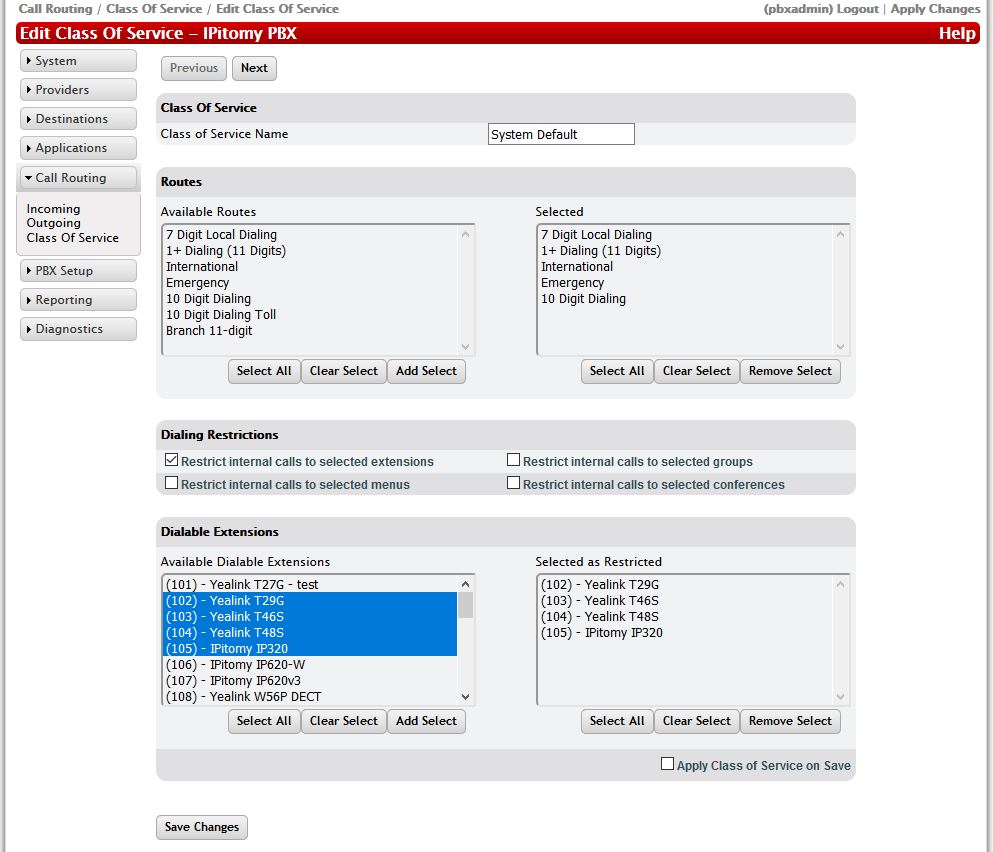 In this situation, you might have groups of extensions that need to use a specific outbound callerID name or number that differs from what's set in their extensions callerID section, such as when calling 911. You can create a different class of service for each physical location, and add all the normal dialing routes since those don't need to be different, and create a custom 911 route for each physical location that disallows extension callerID override, instead specifying that location's e911 registered phone number, so that the correct address comes up on emergency services.

Different permissions, such as restricting International dialing to a specific group of employees

Here you might create different classes of users based on what they are and are not allowed to dial, such as international. In this case, you might grant both classes of service all the standard routes, such as 7, 10, and 11 digit dialing, but ONLY add international dialing to the class of service that the authorized users will be using.

Recording calls on some groups of employees but not everyone

Just like the previous example, you could create different classes of users, each with their own class of service, but unlike the other examples where you add the common routes used by everyone, you'd create new unique 7/10/11 digit routes for each class, one version set as being recorded, the other version set as NOT being recorded (under recording applications, by adding the recorded routes to the recording job). This way, for example, standard outbound calls might be recorded, but management or executive calls can be excluded. In each case, this avoids having users remember extra dialing codes to access the correct routes.

Internal dialing restrictions, such as for a lobby courtesy phone

A great use of internal dialing restrictions comes from the idea of a lobby courtesy phone, with a printed list of permissible destinations that can be dialed, for when someone isn't available to greet visitors in person, for example. You might have it able to dial a menu with some easy options, or dial a "reception" ring group that calls various users able to help the guest, or whatever else might be suitable for the organization's needs, but not let it call outside numbers at all, by not including any routes.

A single PBX can also be a shared host to multiple different organizations who do not interact with each other. These separate organizations can be effectively sandboxed and kept apart through the use of organization-wide classes of service. For these, you would not only create separate routes as necessary, but also restrict ALL internal dialing to destinations "owned" by that organization, such as extensions, groups, menus, and conferences. Under the Dialable Extensions box where they are selected as restricted, there is a checkbox for "apply class of service on save". This applies this class of service to each of the extensions selected as allowed to be dialed, making it easier to quickly apply the class to all the extensions of an organization rather than editing each one by one.